Welcome to our December Newsletter! 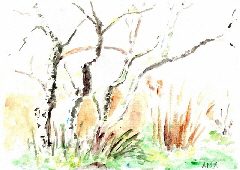 For kids December is a time of magic. A lot is going on from decorating the home with the most beautiful creations, to baking cakes, making sweets yourself and looking at all the wonderful things in the shops that you would like to have as a Christmas present. And finally Christmas with Santa Claus coming with the presents.

Well, as adults we know it is not all quite like that. Still – we can feel all the expectation, our longing for something not quite defined, perhaps a place in ourselves with all the dreams, where we still can imagine a world of magic… And why not let it come out and be expressed?

Right now we have a kind of vacation from teaching, wanting to review our material and our experiences, to see how we can make it even better.

We have a very loose plan about offering a TT in our own place in Denmark in May, between the CC event in Norway and the Threshold in Denmark. If you are interested, please contact us!

The theme for our Newsletter this month is kind of continuing from last month. It is written by Regine Durban, and she also offers some great insights about the play and the whole background. She and Viola Kölner played the role-play together in our last Teacher Training. And they both did it very well!

Abuse from an adult

The idea to take this role play resulted from the exercise we did: Saying firmly: “No!” when we should remember a scene of our life where we “should” have say „No”.

-In our case the girl wanted to please and be a good person, a good girl. She was afraid to hurt somebody. She didn’t wanted to think bad of others, always understanding. She wanted to trust the words and the person.

-He worked with charming words and pointed to her „weaknesses”, accused her that she wanted to reject him, that he is not being good enough. He questioned if she is a racist, if she doesn’t like him, if she doesn’t love him. The more he suspected her being „ not good or loving” she gets weaker and it was more difficult to defend herself. He was very persistent and charming when he sensed the point of her getting out of the car.

-Interesting is also, that the known fearful situation is not as frightening as the not knowing what will happen if you go out of the car in unknown surroundings at night alone outside of a village in a foreign country.

This was the setting: a young woman met a young man in a disco during her first vacation with friends in a foreign country. Everybody of her friends had already met somebody to flirt with, and so she was open to also flirt and enjoy the wonderful warm night etc. After dancing he invited her to show her a beautiful landscape where you could watch and talk in a beautiful setting. So they went with his car. It was not obvious for her that he wanted more than he said. He played the role of falling in love with her right there. When she wanted to stop kissing and wanted to go home, he started to blame her p.e. if she thinks that he disguised his plans, if he had bad intentions? He wanted to have a reason for her to say „no”. Etc.

So the play is very subtle. He is good in leading and not let go of the control by always speaking, charming, asking, suggesting, accusing, questioning her ideals and intentions and avoiding to make her real angry by adding some loving words etc. His leading the conversation didn’t let her come to ask herself if there is another perspective to look at the situation. It’s also not clear if you would have enough courage to stand to her point of view etc.

So there a many possibilities to end such a situation or to not even let it come to such a situation. It depends on the inner force and conviction the „victim” has. In our case her opening the door of the car and stepping out was enough to change his mind. (What she did the second time they played it with a solution – the victim stepping out of her victim role.)

I think it is very important to look at the words and sentences, especially in this last role play. Because it was the naive belief of this girl to believe the spoken words instead of recognizing the energy and intentions. It was also her naive beliefs of how we should treat each other etc.
Words are very powerful and the way they are spoken.
So that might be another point which could be considered in the Conscious Theater. How you distinguish how something is said and what it means.
And even to look at the beliefs systems which are laying below/ behind the situations.